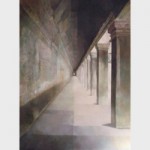 The new exotic series of paintings of Alexandra Fedorova can be described with a quote from Rudyard Kipling “an old deserted city, lost and buried in the jungle”. In The Jungle Book, it is possible to find a more detailed description of the deserted city: “Trees had grown into and out of the walls; the battlements were tumbled down and decayed, and wild creepers hung out of the windows of the towers on the walls in bushy hanging clumps. A great roofless palace crowned the hill, and the marble of the courtyards and the fountains was split, and stained with red and green, and the very cobblestones in the courtyard where the king’s elephants used to live had been thrust up and apart by grasses and young trees”. Paintings like these should be placed in the library of a sophisticated traveller, returned from the colonies, next to a collection of antique arms, hunter’s trophies, and shaman masks. Are these Hampi ruins in Karnataka, which were built upon monkey kingdom, as it’s mentioned in Ramayana?

Or is it the famous Angkor Vat in Cambodia? Both places could be described by a “prophet of British imperialism” as Bandar-log cities. Nevertheless, all these works are a remarkable convincing improvisation based on antique black-and-white photography, as well as on real memories that the artist, a brave traveller, brought from numerous trips in India and South-East Asia. This is Fedorova’s second pictorial series, in which she present herself as “an explorer and a pilgrim who collects sacred things and gains blessings”. In this series, just as before, lovers of Eastern architecture will find cosmogonic symbolism of the universe: temples represent mountains and heavens, a swimming pool is the symbol of World’s oceans, and a drop of water is a human being. At the same time it is an illustration of the noosphere concept of Russian philosophy, which implies culture as a part of the geological process. Human created artifacts become a part of the landscape, and are, sooner or later absorbed by jungles and deserts. The new series of Alexandra’s works is more internally solid. The arsenal of artistic instruments has significantly grown, and the artist has a good shrewdness, in using them to aggravate the same effects of participation in adventure, heavenly mightiness and significance of the magnificent spectacle.