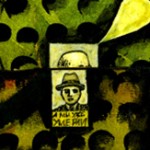 Sergey Pakhomov gladly flaunts two main characteristics of his work, which are absurdity and idiocy. He ambitiously positions them as his creative credo. So what exactly does he mean? We would probably be better off not knowing, but let’s try anyway. We all know the meaning of these words of the foreign origin. Absurdity – nonsense, extravagance – comes from Latin “absurdus” – incongruous, inconsistent, discordant. It is something completely lacking of sense, and moreover, ugly, ridiculous. The word “Idiocy” though is of Greek origin still comes to us from French “Idiot” – feeble-minded, fool, bone-head, cretin. Therefore, Pakhomov’s art is nonsensical, deformed and insane, and as a result, harsh to the viewer. Obvious cultural analogies and associations are absurdist theatre, “Idiot” by Dostoevsky, Dadaism and surrealism. However, this is just scratching the surface, something superficial and western: even Prince Myshkin spent much of his life in Switzerland. Pakhomov aka Pahom is Russian, authentic, original. As a matter of fact, the best part of his stage monologues cannot even be translated. But let’s dig a little deeper. Let us begin by finding an Old Russian analogue to absurdity and idiocy, which ensures better understanding of the subject. Who in Russian cultural history is the most nonsensical, insane, and ugly? Who else but God’s fool! All the dictionaries give the same definition – an oddish, humble before God, crazy person, or even a half-wit. Curiously enough, a Russian word for God’s fool “yurodivy” comes from an earlier word “yurod” or “urod” (an ugly person). In the modern language meanings of these words are diluted, the essence of the fact is hardly seen. In Old Russia a God’s fool was one of the most respected individuals. Just remember The Cathedral of Intercession of the Virgin on the Moat which is commonly known as the Cathedral of Saint Basil the Blessed. Let’s also refer to these figures: 247 Russian God’s fools are known, 36 of them are canonized. Compared with that only four “yurods” were canonized in Byzantium, whereas Catholic Europe didn’t recognize such a phenomenon at all. 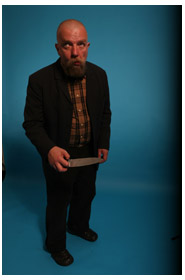 So who is God’s fool? In his own way he is a prophet, fatigueless and ruthless rigorist, his calling is to convict the world regardless of place and time. For descriptive reasons let’s list track titles from Pahom and Vivisector’s album Boncha, they are: The Truth for People, Count Up, Lord. Anyone who has ever listened or watched him knows the way Pahom convicts. God’s fool is also an actor, this is why he needs a crowd, an audience in front of which he mocks and fools around, but when he stays he doesn’t act like an idiot. A perfect costume for God’s fool is nakedness. Saint Basil was also called Naked, and in the description of his iconography conjures memories of Pahom on his show: completely naked with curly beard. God’s fool’s speech is uneasy, usually he rhymes antithetic concepts: “From rags to riches”, “that might such mud” and so on. A.K. Troitsky has also noticed that peculiarity in Pahom’s lyrics: “Pahom and Vivisector have invented a genuine Russian rap. Accordingly, it is nonsensical and ruthless”. But those are just the external characteristics. The main thing is that God’s fool is out of this world, which means that he is beyond the scope of our habitual world. He breaks and destroys the scope; for him general notion of good and bad is relative. Here a disguise of madness is essential, like a picture frame, since God’s fool is not just playing but playing with the forbidden. Some of them were committed to the flames. Sometimes it would come to a bold blasphemy: “Was drunk. Sobs and smashes, his brain is buzzing”, – spoke arch-priest Habakkuk about Jesus Christ. However, unlike a minstrel, God’s fool is here not for the sake of entertainment. More like, he is shocking and braking established norms. With his ugly nakedness he convicts church’s grandeur, with uneasy words – philistine logics of theological preaching. In this context Pahom literally devours “norms” of social behavior. By destroying common sense to the Ground Zero level the God’s fool reveals the eminent essence to the audience. The tactics of idiocy concerning social and religious norms is corresponding to the tactics of destruction of classics by the avant-garde. Keep in mind Black Square and Khlebnikov’s poetry. We admit that today it’s not only Pahom who acts like a madman. For example, Petr Mamonov holds on to the same artistic strategy when he recently played an idiot in a movie. Typical God’s fools are dog-Kulick and Avdei Ter-Oganian who is famous for chopping icons. On the contrary, Pahom doesn’t destroy icons instead he creates icons of his own. A graduate of Moscow Arts and Crafts College, where recently a new subject – Icon Painting – has appeared, Sergey Pakhomov has a great command of this technique as well as Khokhloma handcraft, Palekh miniature, and Zhostovo painting. That you can eye-witness at this exhibition, if you take into consideration the cultural context.