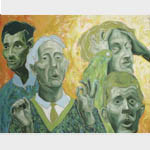 Sergey Sapozhnikov. On the green light Painting of young artist Sergey Sapozhnikov from far Rostov-on-Don looks dual for the Petersburg spectators. On the one hand we can see all attributes of a nugget – the talent getting in space familiar to “Van Gogh’s myth” about almost mad genius who wasn’t understood by his contemporaries (from where Julius Meergrefe deduced the myth about the modern art). To our eye and feeling of life is closer the expressive, spiritualized art that we already know by Van Gogh in Hermitage, by Filonov in Russian Museum, by Arefyev’s circle and “wild” painting of 1980th years. On the other hand behind this expressive pressure of big portraits of people with the green leather, burning eyes, convulsive plastic, surrounded with multi-coloured auras lies tne enigma, the plastic ornament, sending us to ” art brute ” (“crude” or “rough” art, which was invented by Jean Diubuffe in time of existentialism and surrealism. The art was close to the art of various visioneers, children, insane people etc.). Similar effect leave portrait sketches of Antonen Arto – founder of “theatre of cruelty “. Sapozhnikov, on its own recognition, doesn’t know a lot about these art subtleties and it is necessary to tell the story of the artist. Sergey Sapozhnikov, (born in1984) as it is emphasized in all texts about him, did not receive art education and began as well-known J.-M. Basquiat as a street graffiti-painter. Later he was engaged in photography and was attracted by the genre of a psychological portrait. 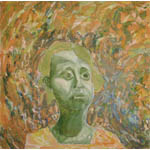 Nowadays he is graduating from Southern Federal University, psychological faculty. In 2000 Sapozhnikov starts to paint, invents the original media combining pastel, oil and acrylic. The young psychologist sees in painting the way of effective emotional influence on the spectator where the main expressive role is given to color and plastic: «Color in my works has positive sense, it is usually favorable for perception. Represented emotions, on the contrary reflect the complex inconsistent intrapersonal processes that we can see in the anxious pose, in the intense look, in the disturbing sight. The paradoxicality of a picture presented in discrepancy of content as a pressure, doubt, meditations, search and the form of color harmony, in my opinion, creates effect of a discord “. Painter Sapozhnikov began taking part in exhibitions of the Rostov artists of the senior generation – such significant artists, as Nikolay Konstantinov (together with Koshlyakov entered the group ” Art or death “) and Vadim Murin. From the senior comrades Sapozhnikov has got knowledge on symbolics and psychology of the color that plays expressive “moral” role in his works. Green color of characters of the artist is chosen as positive color, on which, as Goethe would tell, “soul has a rest” (at Kandinsky, it is necessary to notice, this color in political sense is connected with self-satisfied bourgeoisie, that hardly means Sapozhnikov). Ethicaly-psychological aggression of portraits of Sergey acts in a modern situation, when the person is discredited as individuality. Like in ancient religions it is more and more associated with energies and elements. The social script is moved to a background and the person turns into a surface pressing into life that deforms it, pressing towards. Experts of contemporary painting remember the artist Leon Golub, whose pictures are close to Sapozhnikov’s manner, and are devoted to stages of violence and tortures. Here and there we see, how life distorts human souls and bodies. But at Golub’s interpretation in the actualization is in body theme as a static object of authority/violence and at Sapozhnikov’s interpretation it is in becoming, in physiological dynamics. The mysticism, some isolation and mental experience of Sapozhnikov find a way out in fearlessness of intimate vision, in expression of light and as a result — in the light of soul. The person is not isolated, and can leave for risky search, pass border of individual and find another.