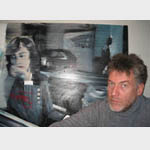 wonderful collection of contemporary art (which includes works by I. Kabakov, S. Gundlach, T. Nazarenko, T. Novikov, E. Logan, A. Vinogradov and V. Dubosarsky, V. Monroe, A. Bartenev and others) and bringing its renowned owner to St Petersburg, this exhibition is meant to launch a new project and to start a series of events focused on the noble and fascinating business of contemporary art collecting. Artemy Troitsky (born in 1955) is a journalist, music critic, active environmentalist and the father of his children. In his childhood, he studied drawing at an art school and was pretty good at that. As an adolescent, he was into music and as a youth – into journalism. There have always been a lot of artists among his friends but he never expected any gains from these friendships. This accounts for the fact that he came to be an owner of art works relatively late (in mid-80s) and absolutely unexpectedly. Some of his early acquisitions (including graphic works by Andy Warhol and Ilya Kabakov bearing authors’ inscriptions) were lost in the turmoil of married life. Despite that, experts consider Artemy Troitsky’s contemporary art collection as the richest one among those gathered in our country by public figures of modest means. “I’m often asked whether I had failures and mishaps in my life, whether I ever made serious professional mistakes. 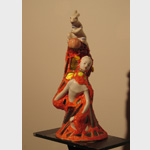 Then I usually tell a sad story about erasing – out of carelessness! – a five-hours long Victor Tsoy’s interview or recall the festival BRITRONICA with APHEX TWIN, AUTECHRE, THE ORB and others that I organized in 1994 in Moscow. That festival was attended by one hundred people because nobody knew the participants at the time. Now, I think I would tell a different story. I would recall how in the early 1990s I used to take my friends and potential clients to the exhibition of then unknown artists Vinogradov and Dubosarsky at the L-gallery on Oktyabrskaya street (the gallery as far as I know does not exist any more). That exhibition included all their classic works and each canvas cost no more than USD 1,000 – 1,500. In fact, I could have talked the price of the whole exposition to USD 10 thousands. I really liked the works. It was not for my greediness that I did not do that. I just felt too lazy to get the cash out of various foreign banks. Now, as you know, such a collection would cost a million. If not a million and a half. There were the stories of other sort, though. To recall just one of them: Sven Gundlach called me one morning and said sarcastically and at the same time indifferently, You were interested in my paintings from the last exhibition, weren’t you? Remember the scrap-heap beside my house? Have a look at it – you may find something interesting. This time I was not that lazy. I went to the other end of the city, found an odorant scrap-heap and discovered – amidst the things usually found in such places – the greatest canvas ever made by Sven who was at the time tortured by the Gogol-syndrom. Generally, I have no attachment to objects. Furniture, electronic devices, clothes, cars, watches never make me happy. Paintings is an exception. Probably because they are not just things. Any sincere and talented art is an extension of its author’s personality. One can form certain type of quite personal relations with images and sculptures. If you like them, they become a part of your personality. If you are not indifferent to the art you collect, your collection will never fail to create a special environment for you and this environment is going to be as comfortable as a friendly revelry. Such a collection can tell more about its owner, his milieu and his life than the owner himself ever imagined.”