Co-organized with XL gallery (Moscow). AN ATTEMPT TO DECIPHER A FRIENDLY JOKE. In Paris there lives an artist called Boltansky. Long time ago his ancestors came to France from Odessa. He likes to exhibit black and white photo portraits with lamps in dark halls. After his exhibitions one feels sad and terrified. In Moscow there lives an artist and gallerist called Petrelli. His gallery is in his coat, art works being scattered on the coat’s underlining. This gallery is called Coat. Petrelli’s ancestors, too, come from Odessa. And the artist himself was born there. Like most people coming from this city, our friend is a good-tempered person who doesn’t care a fig for his career. People always fault him for that saying that the tough and fast-moving Moscow wouldn’t tolerate his slovenly way of living. 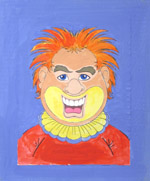 Finally, this happy owner of the unique coat felt fed up with his friends’ reproaches and announced that his gallery would launch a grandiose project with Boltansky. ‘Boltansky won’t repel my offer’, Petrelli said. “He comes from Odessa and the theme of coat should be interesting to him’. Everybody approved of the idea and relaxed. Time passed but there were no events at the Coat gallery and its owner kept rejoicing in life’s pleasures. He disallowed all charges saying he was organizing a serious project and writing a letter to Boltansky. When a year passed and we gave over waiting for the project to come true, a friend reproached Petrelli for idleness and footling away his chances. ‘Sasha! – friends call Petrelli ‘Sasha’. – You promised to show Boltansky’s works. Where are they? You haven’t written him a letter yet’. Sasha seemed offended. “I have” – he replied and then solemnly presented a huge file. He gave us a proud look and opened it. There was a lonely sheet of paper in the file. An accurate line written across the sheet read: Hello, dear Boltansky! P.S. I met Christian Boltansky several times. Since we were introduced to each other either at art events or at parties, it’s very doubtful that he remembers me. While sober, I was always too shy to talk to him. It seems to me that his wish to share the dread his works are overbrimmed with is caused by his desire to make people love him. Though, such desire is familiar to every public figure, including your humble servant. Boltansky realizes this desire in a very simple way. He uses lamps and faces. As for me, I tried to express my warm feelings toward St Petersburg people using the same lamps. Only that I charged them with different kind of energy – that of joy and gaiety instead of dread and despair. With my friends from St Petersburg whom I did not contact for over a decade, I wished to share something nice and pleasant. Frankly speaking, I often feel nostalgic about the 1980s when artists from Moscow and St Petersburg were good friends and frequently visited each other. It would be nice to resume friendly relations free from envy and competition and join each other in the mighty impulse of humane enthusiasm. Though, some are far distant, some are dead… P.P.S. While searching for the exhibition title, my mind was consistently attacked by such headings as Mugs and Lamps, Find Two Identical Faces, Photo-Shop, etc. Suddenly I recalled the story of Sasha Petrelli (who, by the way, helped me with creating these works) and entitled the show Hello, dear Boltansky! A friendly joke.