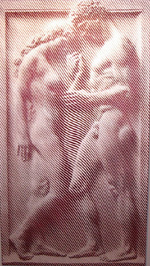 Curator – Ivan Chechot. A well-known artist from St Petersburg, Yegor Ostrov (born 1972) presents a series of twelve large paintings at the Gallery D-137. The works are based on photographs of monumental sculptures by Arno Breker, reworked with the help of rhythmic, undulating rastering. In this project, the artist varies ways of employing and agreeing the colour raster with the forms and rhythms of a photo-reproductive motif taken from the history of art — one that is, above all, figurative and classical. Yegor Ostrov’s series does more than just continue his practice of introducing the motifs of classical sculpture and painting into art. The artist also draws the public’s attention to the works of Arno Breker (1900–1991). The favourite artist of Adolf Hitler and a leading representative of the Neoclassical tradition, Arno Breker was a master of monumental marble sculpture who created a grandiose portrait gallery of representatives of European culture and economics in the twentieth century. Ostrov addresses Breker in the artistic and aesthetic context; the sculptor’s political role does not interest him. 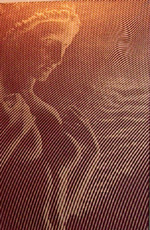 The Russian’s works also pay tribute to Breker as an artist and aesthete, demonstrating the cold beauty of his refined works. The title of the exhibition — The Depth of Starkness — is multifarious in meaning. It is intended to draw attention to the nuances of the aesthetics of the “stark” and the very stark and soft, such issues as the profound, the concealed and the superficial, and their contradictory combination in both the concepts and works of Yegor Ostrov and the art and fate of Arno Breker. The works of Yegor Ostrov are a unique fusion, in the one context and on the one plane, of modern technical devices and traditional sculpture, photography and painting. The ideals and fashions of the 1930s and the Second World War intermingle with a nostalgia for classical beauty in the early twenty-first century. Ostrov’s pictures also act as sculptures, offering many Russians their first introduction to Arno Breker’s plastic art. The original photographs lying at the heart of Ostrov’s works were taken before and during the war by Charlotte Rohrbach. Based on a show of Breker’s works in Paris in 1942, these masterpieces of chiaroscuro were specially taken for a monograph on the German master compiled by French sculptor Charles Despiau. Parallel to the exhibition at the Gallery D-137, a small show of photographs of the works of Arno Breker opens at the nearby Navicula Artis on 10 Pushkin Street. The photographs were taken by Ivan Chechot at the Breker Museum in Norvenich Castle and other parts of Germany. The exhibition also contains literature on sculpture, including works from the collection of the late Timur Novikov — one of the first proponents of Breker’s art in modern Russia. The programme of events accompanying both exhibitions includes a special evening and discussion on Arno Breker, Neo-Academicism and the dialogue between the classical tradition and modern art.