Curator – Ekaterina Andreeva. Book: Timur Petrovich Novikov. Lectures. St. Petersburg: D137 Gallery, the New Academy of Fine Arts, 2003. Memory day for Timur Novikov, 23 May, and the celebration of the city’s tercentenary are symbolically close: for quarter of century, from 1978 to 2002, Timur was modeling the art history of Leningrad/St. Petersburg. The generation of 1980s knew it’s own Novikov, an avant-garde hero, one of the creators of Leningrad rock style and a contributor to Popularnaya Mekhanika and Kino groups and film Assa. In early 1990s he was a discoverer of neoacademism, new technologies of classic images production and a star of first glamour magazines. In mid-90s he went beyond the time horizon, like a beacon, a magic guide of the new youth that would seriously appreciate art and live with special pathos, the one akin to irony, but thoughtfully, integrally and energetically. 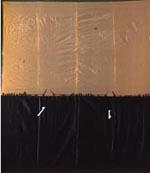 That is how Novikov himself lived from 1977 to the beginning of the 1980s. His art of that period has not been widely known to the public. Remembered by his contemporaries, this art has scarcely been exhibited after 1985 (even in terms of the retrospective exhibition at the State Russian Museum in 1998). Timur excluded these works not because they conceded those of his classic period but rather due to abundance of materials: the whole 2nd floor of the Marble Palace seemed poky for his famous pictures, panels, collages, silk prints, photographs and gummi prints. Thanks to D137 Gallery, we have an opportunity to see Timur Novikov’s paintings and graphic works, his landscapes and portraits. The impulse of the exhibition was given by Elena Figurina, Tumur’s fellow artist in Letopis group: a year ago she brought Timur’s graphic portraits of her (made in late 70s) during the memorial meeting at the gallery. Timur’s portraits and landscapes preserve historic character of the local time: we can see Leningrad at the edge of 1970s-80s, originally a dusky decadent city later transformed by the artist into a bright revolutionary site of changes. Retrospective element belongs to the image of St. Petersburg since its first century, which renders local time a shape of sphere unifying the origins and the results… The two halls of D137 Gallery house about 40 graphic works and paintings from the collection of the artist’s family and private collections of St. Petersburg and Moscow. Novikov regarded life as a craft: not only did he explore and mine it but also improved and expanded its cultural layer by rendering aesthetic value to its social plastics for the sake of revealing its core. The results of his art and theoretical work call to the attention of those seeking for the sense of life. D137 Gallery and curators of the exhibition also published Timur Novikov’s lectures he delivered in 90s in St. Petersburg and Kaliningrad. The book was illustrated by Oleg Kotelnikov.