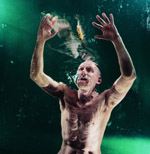 Booklet. Co-organized with XL Gallery (Moscow). The Alice vs. Lolita project testifies that Oleg Kulik’s radical attempts to transgress the horizon of the human presuppose a return. Transgression is like a boomerang. That point of departure is always definite and unforgettable. The animal-effect Kulik represents in culture has not been appreciated by the Man of Culture yet, although it promises a lot to him, even too much, perhaps, including the recipe for immortality (and the animal is immortal as it knows nothing of death, of tabooed zones of meaning, of conflicts between the Real and the Symbolic). 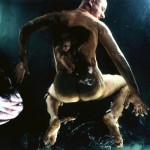 Kulik’s promises were transformed (forever or for the time being?) into conventional parlance, into negotiations on conventions, to be more exact. The element of passion is one party to these negotiations, and the attempt to curb it is the other party. One party is imagination that multiplies itself mirror wise, while the other presents the transparency of a fine construct. On the other one hand, we have Lolita and submersion into the infinite depth of the unconscious; on the other hand, we have Alica and the emergence of childishly naive and wise meanings. A treaty between the two parties is possible if it is possible to visualize their eternal conflict in an image that could satisfy both parties. Oleg Kulik ranks among the most interesting Russian artist of the nineties. Alongside with Ilya Kabakov, he has won the greatest acclaim from international art critics. He has managed to attract the attention of art critics and exhibition curators the world over with performances that are characterized by «strong» expression, where he himself assumes a role of «artist-animal», or, more specifically, «artist-dog»; or else, at time, he would be a bird, a fish or a bull. The artist thus asks the basic question about the essence of the human in a human, and what a reverting to the state of «original animal» may mean to him or her.