Sergeev Sergey – “Inside and Outside”
(painting, metal painting, graphic art) 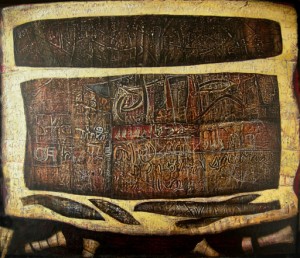 “In this project Sergey Sergeev expresses spatial realization of subjective time. He is interested in the interaction of modern inner identification and past states going outside our perception. Modern conscious personality is like a Russian doll hiding numerous layers of past – periods of time underlined by our memory. The artist, who has experienced this process, separated and at the same time tied together principles of contemporary creativity (represented in the recent works) with a bundle of emotions and ideas, which disturbed him in the past.Considering his previous works, Sergeev analyzes the phenomena of creative memory. The artist creates new versions of the early paintings in a completely different technique: replacing easel and brush with a computer. He is not attracted by almost ideal prints, which are very popular in the contemporary art now. Sergeevs’ computer editions of his works are not simply the copies of the previous ones (the majority of which are not available now), but it is the experience and emotions that the artist goes through all over again. This time the artist recreates the process of painting itself, recalling every single detail like the hands’ movement, peculiarity of strokes, and even the moments when the bristles are stuck in the painted layer. Keeping the composition and not changing the concept, the artist only points out the texture. On the one hand, this means a cautious restorer’s detachment towards someone else’s painting, and on the other hand, artist’s fresh look can reinforce intensity of the painting. In this attitude we can recognize Sergeev’s aspiration for precision of shape and idealness of expression.
The motif of a simple meal, table with flasks and the varity of food is repeated in the memories of landscapes and still life, which were made in Spain. But wine and bread are almost like Communion,like holy gifts. A chalice reminds us of the Holy Grail and fish is a symbol of Early Christianity. In the ‘gray Saint Petersburg’ series the world is different, the houses and canals are cold. However, using his favourite composite method (view from the window opening) , Segeev leaves on the windowsill some hints – already familiar to us‘spanish’ signs : bread, fish and ripe pomegranates of the bloody red colour, ‘sweet wounds of Christ’ like Federico Garcia Lorca said. Artist’s interest in Flemish Old Masters and the Northern Renaissance is clearly seen in his spanish and St.Petersburg series.
The portrait series ‘New Wave’ shows rebel image of New Wave movement, which was extremely popular in 1980s: the mix of music, filmmaking, fashion, club culture, home exhibitions and squatting. It was the time when many unique projects of Leningrad/St.Petersburg culture emerged: ‘The New Artists’, ‘The New Composers’, art-group ‘Alypiy’ ( which occupied a house on Ligovsky prospect 127-Sergey Sergeev was its member).The strict images of heroes of that wild epoca are carried on by the characters of our time, their musical and art continuity is underlined by chords of rich colours on the abstract background. The music, chosen for this exhibition, is also associated with New Wave movement. The experimental sound of ‘The New Composers’ gives voice to the images. Audio vibrations of the music and visual vibrations of the complex textures of the paintings evoke different responses.
The method of artistic perception, used by Sergeev in his recent works, is called ‘urban archeology’ by Alexander Borovski and expressed in the unusual form of palimpsests – layers of cultural marks and signs. Thousand-year symbolic layers are shown in acrylic painting, metal painting, computer graphics, started from scratch in the texture oriented style of the works. The artist turns to the memories as a motive power of his art, but this time he analyzes universal experience, not only his own one or the one of the generation. His paintings are full of culturological and philosophical allusions, arising from petroglyphs and leading to the modern metal constructions. In the works of Sergey Sergeyev experts see the development of the professor Samokhvalov’s theory of palimpsests, the influence of anthropology of Levi-Strauss, Frazers’ ‘golden boughs’, Propp’s structural research of folklore, Barthes’ myth, discourse and other concepts of semiotics. However, these paintings are not a scientific research, but creative image, that visualizes delicate process of human and universe development and shows us emotions that only art can reveal. ”