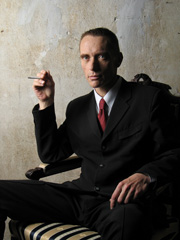 Georgy Gurianov was born in Leningrad (St. Petersburg) in 1961. In 1975 he entered to the
Serov Art College, but left it in 1976. In 1982 he stayed one of the participants of the New Artists group and began to exhibit his works. From 1984 he worked with the group Noviye Kompository (album “Na start!”) and acted in various films, directed a sport program on Piratskoe TV. From 1984- 1990 he is a drummer with the rock group KINO and from 1985 Georgy Gurianov worked with Sergey Kuryokhin and his Populyarnaya Mekhanika group. One of the founders of the Friends of Mayakovsky Club. In 1993 he was appointed Professor at the New Academy of Fine Arts. Works as a painter and photographer in St. Petersburg. Georgy Gurianov is well known as a composer and as a member of such cult Russian groups as “Kino” and “Pop-mechanica”. The 1990s witnessed the rebirth of the classical traditions of European art. One of the most exciting representatives of the New Classicism is Georgy Gurianov – painter, photographer and professor of the St Petersburg Academy of Fine Arts. The difficult task of restoring lost traditions and mastery has produced outstanding results. Like the masters of the Renaissance, Gurianov addresses the works of past eras. Like the ancient classics, the artist finds the ideals to which he aspires among the heroes of the Olympic Games. Gurianov’s heroic efforts have been highly rated by art lovers and critics. His name appears in textbooks on the history of twentieth-century art and his works have been acquired by the world’s leading museums.

George Gurianov died in 2013. He was buried at the Smolensk Cemetery in St.-Petersburg.