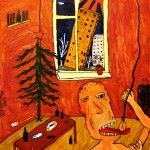 Devoted to the 25th anniversary of the artist, the exhibition includes new works as well as the famous series ‘Magic Psychedelic Police’ /Volshebnaya psikhodelicheskaya militsiya’/, which was nominated for the Kandinsky Prize in 2010. ‘Magic Psychedelic Police’ was shown in several cities of Russia, but not yet in Saint Petersburg. Grigory Yushchenko is one of the founders of the famous art group ‘Protez’, the main principle of which is combining brutal, expressive and sometimes provocative style of performance with the raising of social and existential issues. At the same time in their works and its’ presentations the attention is paid to self-irony and ironical attitude towards the viewer. 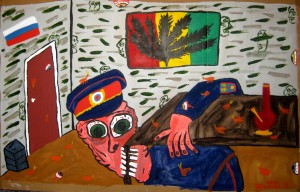 Grigory had more than 20 exhibitions and performances in cooperation with art group ‘Protez’, 2 personal exhibitions, was three times nominated for the prestigious Kandinsky Prize (in 2007, 2008 and 2010), participated in major art festivals and group exhibitions (e.g. International Biennale for Young Art ‘Qui Vive?’ in 2008, 2010, ‘Perm alive!’ (‘Zhivaya Perm’) 2009, 2010). The series, which brought Grigory unexpected fame, “Advertisement of drugs’ (posted online),was taken too seriously – after this action unknown people approached the artist with the words like ‘when we gather together in our neighborhood, we look at your paintings’. Grigory was the head of the musical art-pop project ‘Albina Sexova’. The list of his activities can be easily continued. Here, in this new project ‘Skull Scabies’, the great freedom and artistic brutality of the realization is combined with the revelation of the philosophical issues. However, it is done in a very unusual, a bit comic and sometimes even mocking way. All these features make the art of Grigory Yushchenko stand out: being not dolefully instructive but very optimistic and life-asserting. ——– A word from the Artist: ‘Skull Scabies’- is my indication of such state, when you are not on the edge of something different, you are not choosing anything, you are not that excited but when all this euphoria has already gone, when you have already seen what is there beyond that magical finish line, and there is nothing, but some stupidity, gray hungover greed. It is when you have already won or failed, that does not really mean, and there is only emptiness left. We watch a movie or read some book and after all the final scenes there is always titles or a page with contents at the very end. But life is a bit different. Lets say a soldier came back from a war and what is going to happen next? only sad and poor life.. and he is lying drunk somewhere under the bench with all his war medals and he is not able to win anymore. Whatever flash of inspiration I get or even if it suddenly dawns on me – anyway I have to come back to this reality with all its’ dirty socks, humans without human faces, and to all these everyday low-grade pleasures. The party is over and odds and ends are the only things left. These fragments people consider as life. And this annoying state, persecuting every single man, is called ‘skull scabies’ because of its importunity. It is this state that my latest works are about. For the first time in five years I decided to leave behind all the hints at social issues, because I’m sick of people attributing me to the left wing, to the right wing, to the ones, who criticize our society, about which I honestly don’t give a damn. I made a clear and simple painting without overloading it with meanings and hints about this life when all the titles are shown and the final chapter is read, about this unpleasant but for some reason beautiful moment. It is about idyllic landscapes that people see and cannot appreciate its beauty anymore, about loneliness that covers the remains of mind, about butterflies on the corpse and about all other pleasures like that.