Black and White Photography Last winter I found myself in Komarovo a village on the ice of the Finland Gulf. There were fantastic hummocks along the coast, it was snowing heavily, and there were seen lone figures of fishermen disappearing in the void and then coming back into reality again. This is when the title “Little Men in Void” occurred to me. A fisherman image is full of symbols and hidden senses, whereas fishing itself is associated with meditation after which you are coming back home. I have been walking on the ice, farther and farther, until I lost sight of either the fishermen or the cost. I was all alone, surrounded by an infinite void, a pungent fear of loneliness and madness filled me, but after a while I did mange to overcome the fear and, all of a sudden, felt amazing lightness and absolute freedom. This transition, between life, dream, and death, state is the major theme I try to comprehend in my art, which is called “Transpositions In Dream”. “T.I.D.” is a virtual audio-visual space permitting teleportation, time-transformation with coming back to childhood, and reincarnation. 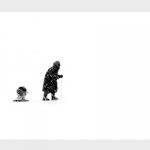 I have always wondered about the theme of void in human conscious, and a few years ago decided to make a series of bromine-silver landscapes reflecting this internal state. Investigating my own sub-consciousness with the help of black-and-white photographs I build the chains of interdependences and associations closely linked with the basic questions of existence (emptiness, sense of birth, life and death, soul transformation) and thus permitting an enforcement of the perception and reaching a maximum possible depth of immersion.