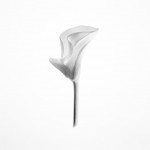 After half a lifetime in dire straits I am already old; I stand alone in my study to whistle in the night breeze. The pearl under my pen has no where to sell; it is tossed and thrown into the wild vine. Xu Wei, 16th century It’s been three years since Mikhail Rozanov, a well-known Moscow-based photographer, opened his grandiose show of his architectural studies of colonnades and fountains at D137 gallery. This time, he presents his new series consisting of twenty shots made at various museums of natural history. These classically styled black-and-white photographs of dead exhibits form two cycles: flowers and butterflies referring to the elements of air and light are represented in a separate room to better contrast with the inhabitants of the sea depths – sea-stars, corals and the skeletons of various fish. This exhibition is demonstrative of the paradoxical processes that are currently developing both in science branches and in art genres. Natural history shows itself in its fundamentally contemplative nature it seemed to have forgotten of since the time of Carl Linnaeus’ biological nomenclature and the cabinets of curiosities. In art, traditional still life seems to disassemble into separate objects. Among art historians, still life is often considered as the best genre to ‘test’ artistic innovations. Still life is quite unpopular nowadays but Rozanov is a conservator both literally and figuratively. It is the still life genre – entirely decorative and perfunctory at first sight – that he chooses to demonstrate the current perspective of contemporary art development. Still life has been studied thoroughly. A brief consultation with special literature will allow us to read a still life picture as a developed text and a narrative. Flowers that usually go together with insects in classical still life used to be perceived as a symbol of caducity and frailty of human existence. 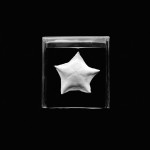 The ‘flower language’ was meaningful and transparent to any educated person. In scientific catalogues we find tables allowing us to determine each flower’s symbolical meaning and its Latin binomial name. Insects are perhaps the most prevalent representatives of the still life fauna. Butterfly together with its previous reincarnations – caterpillar and pupa, traditionally refers to the three stages of being as if showing the way from life, through death, to the revival of soul. Butterfly may also means the soul that is about to leave the body. In the alchemic discourse, the sea-star summarizes the whole of hermetic cosmology. This natural pentagram, stella maris, is the underwater double of the above-water star that, in its turn, may be understood as the highest ego of a human soul. To combine these two poles is to accomplish the meaning of the philosophical way. The hieroglyph fish skeleton gave birth to Samekh, the fifteenth letter of the Hebrew alphabet, that traditionally symbolizes a stock, a new being appearing in a new form and the self-contained creative process. The fish frame also corresponds to the 14th Tarot Arcanum and to the rich ‘fishery’ Christian symbolism of the divine. Shy of any conceptualism, Rozanov relegates all these sapiental antiquities, moralities and sage allegories to the background. In the still life genre (which he takes in its meaning of quiet and motionless life as suggested by the English genre name and its Dutch counterpart stilleven rather than in the French sense of nature morte, ‘the dead nature’) he is captivated by its artistic and expressive element. The artist derives apparent pleasure from contemplating the beauty of this mysterious and nearly psychedelic world. The lead is taken by melancholic concentration and self-control that are so characteristic of Rozanov’s art in general. In this sense, Rozanov’s photographs bring associations with the ink calligraphy art and the old Chinese genre of ‘flowers and birds’. Inner quietness, peace and contemplativeness are the qualities of Rozanov’s art that are so rare in the great bulk of modern art ‘production’. His works are not the ‘portraits’ of dead natural objects but rather strict and ascetic abstractions, the emblems of their author’s mental state. Still life is the most formal of classical genres and, as such, is cherished by the author who is inclined to estrangement, the expressly constructive composition and perfectly balanced image.