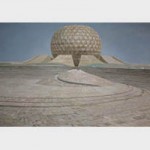 In a temple, its outer form, abound in images and decorations, refers to the prakrti, the nature, and the multiple manifestation of the Universe in its interplay with the future. In its turn, the inner part of the temple, its sanctuary that is surrounded, as a rule, by naked walls is referential of the purusha, spiritual principle, pure Being and Consciousness. Marilia Albanese India In her second exhibition at the D137 gallery, Alexandra Fedorova who formerly experimented in postmodernist fashion presents her new experiments done in quite a complex and nowadays very uncommon genre of architectural painting and veduta (cityscape painting). Nowadays architectural/musical self-feeling is looking for new ways in its romantic search of trusting soul. In St Petersburg this feeling is traditionally more acute. Architectural motives in art may be considered as actualizing the problem of correlation between the outer and the inner, the innermost ego and the outer facade, persona. As socio-ideological substance grows solider, persona is tending to become more definite and is gradually turning into a mask. The fact that more and more of our acquaintances are turning into pilgrims (or ‘travelers to the East’, as Hermann Hesse would put it) testifies to the flight from this ossification. The colonizer (among our artists this figure is represented by Vasili Vereshchagin, to name just one) was first replaced by the comic figure of the tourist which is currently being supplanted by the pilgrimatic researcher who collects sacraments and reaps the grace. Even those who go to Goa just to chill out never fail to notice that the aborigines are embedded in the local landscape from which the westerners stand out. Fedorova employs painterly methods to investigate this current popular trend to clear one’s desires and to inspect oneself. 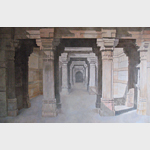 Quite uncommonly, Alexandra Fedorova possesses both the romantic adventurism of a lonely traveler capable of covering thousands kilometers of exotic land (which greatly contrasts with her elfin-like appearance of the child of northern forests) and the asceticism, great attentiveness, austerity and love for order. Like most of us, she first undertook ‘discipular’ travels to the West where she studied classical monuments. Her journeys to the East she started to undertake at the beginning of the new century became definitive to her feeling of life and art. The greatest impressions Alexandra got from her pilgrimages to Turkey, Syria, Jordan, India and Nepal were from architectural monuments that keep living and functioning quite tangibly. Nowadays, Turks use the shrines of Lycian kings for their everyday purposes just as Italians did in the 18th century when they put their linen out to dry among Roman ruins if we are to believe Hubert Robert’s paintings. These impressions from touching the Eternal, Cosmic and Divine are difficult to word, and photography is only capable of hinting at them; it was these impressions that made the artist to turn to the painterly technique. Fedorova is working on her paintings at her studio for years. Like an architect, she paints to create the image of the monument and the concept of herself. These paintings grow into something greater than simply a ‘portrait’ of a building, thus creating Fedorova’s contemplative experience, the most open world model. The artist’s vision is always unordinary and often tends to find an unusual angle. Her composed manner formed by thorough study of Dutch Golden Age genre painters emphasizes the effect of concealed mystery that sometimes makes phantasmal appearance in the staffage consisting of animals, birds, human figures and flaunting drapery. These paintings may be compared to the ‘psychedelic realism’ of the Moscow-based artist Ivan Dmitriev who knows how to create some mystic impertinent creeping in a corner of an otherwise laconically painted hut interior. It is interesting to mention that the artist brings the remote Eastern reality closer to us; she has no detached manner while demonstrating it – rather, we always feel her personal presence. Fedorova’s vision is not one mediated by the camera’s viewfinder – rather, she tends to overcome the optically-centered vision whose greatest expression is often found in the photographs made by the founder of formal art history Heinrich W246;lfflin during his Italian travels. One may say that Fedorova’s taste was formed by St Petersburg to continue the tradition of A. Ostroumova-Lebedeva and P. Shillingovsky. The major appeal of the Eastern architecture is for Fedorova in the grandeur of ensembles, their organization, mysterious beauty and, at the same time, science-like constructedness. Ornamentality combined with greatness, pompousness and spatial amplitude were features shared by Indian architecture and European Baroque already in Heinrich W246;lfflin’s perception. In Alexandra Fedorova’s works, Eastern architecture is understood as broadly as possible: we see an antique amphitheater in Turkey, an observatory in Jaipur, pylons of a mosque in Ahemedabad, a market place in Damask and even a modernist ashram, Sri Aurobindo’s Matrimandir. However, to understand the core of the artist’s work and her approach to Eastern architecture, it suffices to look at the symbolism of Indian temple that is supposed to represent the world in all its aspects, both the factual and the ‘subtle’, and whose parts are named to correspond to the parts of human and divine body. “The garbhagrha (sanctum sanctorum) in its simple etymological meaning is a ‘well-proportioned structure’. As an extension of this meaning derived from the root-verb ma (=to measure), it signifies God the Creator who ‘measures out’ as it were, this limited universe from out of Himself, the unlimited principle” (http://www.sanathanadharma.com/temple/symbology.htm).