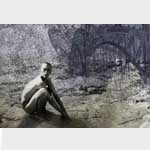 After Barbarella, the title character of Roger Vadim’s 1968 movie played by Jane Fonda, embarked on a space trip to find and stop the evil scientist Durand-Durand and particularly after she knocked out the Excessive Sex Machine, glamour, irony and eroticism conquered science fiction. Since the late 1960s, the mix of fantasy and ‘cosmic soap opera’ has been gradually taking the lead in this genre. The death of science fiction is as widely discussed as the death of art: within last ten years no significant work appeared in either sphere. At first, the literature was suppressed by film fantasy dressed after the comic-strips and then the both were displaced by computer games that, in turn, started to generate films and books. Meanwhile, science has grown too complex and overspecialized. In relation to science, anyone now is a layman, whether you are a sci-fi writer or a man in the street, who nowadays does not differ much from his 15th-16th century’s forefathers since he tends to take the fictional characters of the entertainment industry for real just as his forefathers took for real the dog-headed people. Interest in space that used to be the pivot of science fiction seems to have disappeared. In 1990s, it was replaced by the so-called virtual reality. The astronaut Barbarella who was once recognized the sexiest sci-fi movie heroine, yielded to the archaeologist Lara Croft (the UK science minister, Lord Sainsbury, called her ‘the brightest achievement of British scientific thought’) who plunges into the depths of Earth (come forward, psychoanalysts!).

In such a situation, forty years after Barbarella and the Sorbonne revolution, Nina Vitanova, the artist of Bulgarian origin currently living in Switzerland and France, resolves to create her own space utopia. Nina has many talents. Besides being an artist, she is a good dancer, a society woman and a skilled cook. Armed with these talents, she went to conquer the artistic space and fine societies of Russia’s both capitals. In 2004, her exhibition Brain Extension at D137 Gallery showed her Russian friends as characters of her multi-layered digital collages. Now, in her new exposition The Aliens, the artist leaves the jungles of the subconscious and takes her characters into the open space. The project has several parts. One of them includes large-size photographs processed in Photoshop to resemble traditional comic strips. They picture the artist herself exploring new galaxies together with the joyful mega-star of local actionism Vladislav Mamyshev-Monroe. These two are defined as ‘the aliens’, the new Adam and Eve, the sexy Uebermenschen who conquer the unknown with comic grimaces and theatrical gestures. The second part consists of portraits showing particularly impressive bodies against the backdrop of extraterrestrial landscapes where among the idols of the local artistic arena (such as Georgy Guryanov and Michel Tumbler) one can recognize the author herself. Compared to the jaunty grotesques of the ‘comic strips’, these representatives of the new breed look particularly enigmatic and dramatic. Digital photographs are complimented by a video Vitanova co-authored with Masha Sha. In this video, Nina, Tumbler and Ignatiev Artem Anatolievich demonstrate in a dance improvisation quite an original plastique of the future humanoid mutants. Vitanova’s poetic achievements based on the contrast between pathos and irony and glorifying the space conquerors function as a running commentary to the visual component of the exhibition: on earth humans are living in a sort of urban jungle. their bodies having mutated to a point where they hardly need food drink or shelter any material necessity has become vane they hardly remember the strugles the material urging – some powergames but they are still expressing more alife, a romantic potential several humanoids have left the planet earth since their bodies need hardly more than light air and a slight humidity more adequate planets for human existence are found in universe the most resesistent – as well mentaly as physicly – are send out to explore vaste new planets to whom they are mindscanned through the power of materialised imagination they drift to other humanophil planets thus no thechnological tools are needed to transport them to remote destinations the chalange is to endure the lonlynesst untill other humans follow those spacepioniers meantime they have taken strange little animals from earth to share their solitude and another human species in space: the longleged longhaird heroins the subtile terminators placing their beauty as a martial art fighting wicked aliens with an icy smile the «femme fatal» in space the romantic conquistadores of universe riding on giant grasshoppers fighting virtual dragons as melancolic as any spacetraveler they express in wild action trying to cover thus all doubths + depressions which might arise one pinkish-foggy morning on the 13 mooned twi-suned planet pentox… As a project, The Aliens should be considered as a threshold phenomenon characteristic of our current position in the universe. The ultimate development of the brutal psycho-organic space of Vitanova’s previous project The Expansion of the Psychic ends up at the limit of peripheral stories, identification fragments and mental pulp. The same limit of the individual is experienced by the touching femmes fatales of the fantasy glamour space. The virtual world has been programmed to have nothing new beyond its limits: with this world, we only see the disintegration and reproduction of what we already have. Our attempts to achieve social success and inner breakthrough slip into the comic-strip flickering. Desire to break through the limits of virtual worlds into reality can not be realized not because these worlds are great but because the closer you get to the border and the limit, the less possibilities for a free and original gesture you have. The world starts its involution and you get whirled in the blockish infinity of fragmentation.