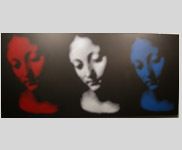 Yegor Ostrov belongs to the rare artists who invented their own artistic device and distinctive technique – the thing hardly possible in contemporary art but truly necessary for any artist. Ostrov couples figurative image and abstraction by masking figurative compositions with the grid. In 1994, Timur Novikov, the founder of the New Academy of Fine Arts, ironically attributed the origin of Ostrov’s technique to the future NAFA professor’s specific sensibility to the rave atmosphere flashing with stroboscopic lights. Ostrov investigates what happens to the classic image under the rigid conditions of technological milieu on the threshold of the 20th and 21st century. The experiment is based on museum masterpieces, both in painting and sculpture. Ostrov’s first exhibition at D137 in 2004 was dedicated to Arno Breker, a classic of the 20th century sculpture. Ostrov is trying to describe the beyond-the-museum role of classic images in modern culture. 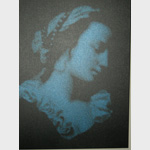 Over several decades the artist have been persuading his spectators that his technique shall not be construed univocally as visual noise that extrudes classics out of the visual field conquered by the abstracting grid, i.e. by multiplying techniques. It was the Depth of Starkness series (dedicated to Breker) that presented the paradoxical interaction of figure and the grid covering it. Ostrov turned the grid into a force field: above certain fragments of the body lines become curves and, like magnets, draw attention to that very plastic bundles of the image which the sculptor aimed to emphasize. In 2006 Ostrov started using mirror instead of canvas as a ground of his works. Now the hued grid, like a bundle of lines engraved on metal, fixes the outlook and the sense of a sculpture or painting by rendering it fleshless and at the same time tree-dimensional. The image transgresses into a new dimension. In 2007 Ostrov produces two series of paintings united by the general title Sign and Image. In these series he used canvas, stencils and car paints. Both series are replicas of museum paintings of Leonardo, El Greco, Georges de La Tour, Jean Auguste Dominique Ingres and other artists. However, in the first series Ostrov takes a ‘close-up’ of the museum original whereas in the second he sensibly reduces the composition format or repeats the image a few times in different colors. In the first series you see colored backgrounds on which Madonna’s visage or nymph’s body materializes; in the second the background is black, it functions as a neutral absorbent of any sign. In the first series, the classic image is also austere and schematized; still, Ostrov creates a scheme that provided reproduction of basic semantic and plastic details. The glimmering of paints on metallic surface endows these images with some new technologically dehumanized objectivity. They look incorporeal due to the reflecting texture but they are objective and utterly convincing as the ideas of perfection. In the second series, fragments of museum paintings drift towards the signs of contemporary subcultures. They can easily be taken for the ‘gothic’ and the ‘fantasy’ that substitute for the fairyism and diversity in our functional technological culture. Between these two possibilities represented in the two series Ostrov places the El Greco’s Savior engraved on a mirror illuminated with Swarovsky crystals. You look at the image and you see your own face reflected in it. Everyone decides on his/her own which way of looking at the classics to choose. What Ostrov demonstrates is how significant the classical image is. By doing this, Ostrov succeeds to Andy Warhol who inserted the Dove company logo into Leonardo’s multiplied Last Supper. Warhol could hardly have any blasphemous intentions. Instead, he wished to emphasize the objective foundation of symbols and show the real grounds of all pre-calculated harmonies since both the dove soaring on a soap bar and the dove symbolizing the Holy Spirit are silhouettes of a real bird chosen to signify the purity because of its snowy white plumage. In 1980s, when Warhol chose The Last Supper as his subject, the Dove bird flying about in New York or any other city and easily recognizable in every store was bearing the evangel of the global and democratic visual environment. This environment allowed for the peaceful co-existence of mass produced signs and greatest masterpieces of art turned into the signs of themselves. Also, this environment provided for something that powerfully draws us to the classical images of antiquity and Renaissance, namely the intuition of immortality. Today, when many meanings of museum paintings turned dumb, the idea of anthropomorphic spiritual and bodily beauty all these paintings share is perceived as a condition necessary to accept life. Objectivity of the beautiful also unites figurative and abstract art due to the physical perfection of the world. Outside this law, geometry turns into a functional bar code containing all possible information on a thing but unable to show a way of animating it, which can only be made by representing it as an image. Yegor Ostrov’s exhibition Sign and Image points out this subtle but very important distinction.