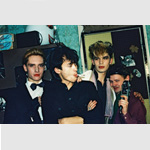 To celebrate the 25th anniversary of the Leningrad Rock Club, D137 gallery exhibits Natasha Vasilyeva’s photographs of KINO rock band. In those years, Natasha Vasilyeva was an active participant of the rock club’s events. None of the exhibited photographs has been published before this show. Artemy Troitsky, a well-known journalist and music critic, presents this exhibition. NO PICTURES – NO KINO Bass guitarists were also a problem for Victor. They did very well as musicians but they looked very prosy. But the other three were perfect. Tsoy, Guryanov and Kasparyan seemed to perfectly correspond to the Soviet propaganda clich233; of ‘friendship between peoples’: the slant-eyed Asiatic Tsoi, the Nordic Caucasian Guryanov and the darkish Southerner Kasparyan. The latter couldn’t have passed for a Black but could have easily be taken for a sensuous Latin American. For Kino, appearance was no less important than music. This distinguished them from all other Soviet rock bands of the time and was not the last reason to make them famous. Style and sex were almost totally lacking in national music projects. From time to time one encountered a bright front man (e.g. Aguzarova, Mamonov, Lagutenko) but the visual drive equally distributed between all members of a band is Kino’s exclusive feature. They liked to dress up and wear gorgeous scenic make-up, they knew how to put a certain face on and when to adopt a certain pose. For themselves, they were FASHIONABLE GUYS in the first place and only in the second were they what they were taken for by the rest of the world – artists, musicians and heroes. All these features are present on Natasha Vasilyeva’s vivid photographs – the sculptural postures, the wacky hairdos copied from DURAN DURAN, the androgynous mystique, the glamour of the new Romanticism, and the free-swinging fun on any occasion. … You look at these archival shots, idyllic and touching as they are, and it takes you some time to realize the point – and when you do realize, it gives you the shiver and makes you tremble with delight because you realize that these nonchalant young men capering in the ever-darkening past are in fact the young gods. The best rock band and the all-time most beautiful Russian pop-myth.
Artemy Troitsky Copyright © D137 Foundation