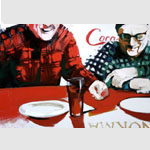 Marina Fedorova graduated from the Mukhina Art Academy in 2006. Defense of her thesis was quite a performance. Fashion designer and illustrator, Fedorova painted a white dress right on a model whom she met face to face at the podium. Professional precision of Fedorova’s manner was immediately noticed by many critics and viewers of the fist solo exhibition of her graphic compositions that took place at D137 gallery in May 2005. This year, the artist exhibits two of her new series of paintings at XL gallery in Moscow and D137 gallery in St Petersburg. One of the series is devoted to the cult figures of fashion art, including Coco Chanel, Yves Saint-Laurent, Vivienne Westwood, Yohji Yamamoto and photographer Helmut Newton. Another is a hommage to such heroes of American art as painter Edward Hopper and film director David Lynch (Fyodorova borrows the title for one of her paintings from Lynch’s film The Straight Story). The very title of the exhibition, Autumn Time, refers to the famous 1968 hit Summer time, and the living is easy as well as to Jackson Pollock’s masterpiece Autumn Rhythm: No.30, 1950 (Pollock and Lee Krasner also appear on one of the paintings). 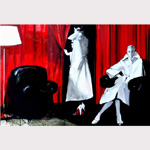 Marina Fedorova is distinguished by her ability to show her subject in the flash of its total disclosure. At the same time, the artist does not yield to the style and spirit her protagonists, even if they are legendary fashion designers. She definitely has her own style and there is no reason that would make her to give up being herself. Portraits of fashion designers and genre pictures-frames are made in Fedorova’s own style – they employ the manner of cinema posters of the Nouvelle Vague time, the wintry language of pop art’s transcription of advertisements and the quickness of magazine illustrations that absorb the light glare of fashion. Since Fedorova’s pictures seem to be infiltrated with the lipstick carmine they are superficially attributed by critics to the currently popular trend of trash glamour. This trend is occupied with the utilization of ‘glamorous garbage’ of media images. Both pop art and Edward Hopper have been repeatedly huddled over by this trend. Moreover, Hopper won recognition not so much for his own work as for the influence his pictures had on the frame composition in Alfred Hitchcock’s films. However, Fedorova’s attitude to the image recycling in cinema and photography is quite different. The phenomenon of global mass media recycling that exercised postmodernist minds of the late 20th century shows its other side at the beginning of the 21st. Now, it brings attention to the image ecology. Fedorova sees her task not so much in the mythologization of mass copying as in the creation of a place for private art meditation beside the objects of mass worship. This is achieved by means of adding her own interest to the impersonalized cult of the millions. Each of her paintings is this sort of meditation – should it be focused on Pollock’s and Hopper’s styles or on Westwood’s and Chanel’s design. In the world that makes it more and more difficult to avoid substituting thoughts and emotions for their surrogates, artists’ work has again to imitate the natural mechanisms of either self-making or self-purification. It is artist who is responsible for the vitality of megalopolises’ visual milieu. And it is the vitality of silvery colour in Fedorova’s landscapes and the emptiness of the white appearing between two cups on a table in her still lifes that make the space of these paintings living and unforgettable. The painterly device invented by Fedorova will always preserve freshness and clarity of world perception for everyone who happened to resonate with her pictures.