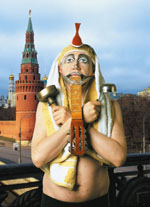 Booklet. Co-organized with XL gallery (Moscow). Timur used to tell me: «Vyacheslav Yurievich, you’re our bacteriological weapon in Moscow. They like you there for your artful imitating of various women while you’re in fact a Fantomas». …With all my absolute trust in the ideals of neoacademism, I moved to Moscow in order to carry out the systematic work of destruction and to finally smash down the so called Moscow Conceptualism school. Which turned out to be a tiresome task since such school doesn’t exist in reality. But you can’t stop the launched torpedo and I had to start acting. …However, all these Herculean labours proved to be just a light prelude to the deciding volley fired at the first Moscow biennale of which the Conceptualism adherents had been so anxious for a long time. Thus the old and most important task I had been entrusted with by the Teacher was accomplished. On 29 June the honorable St. Petersburg public will have a chance to see all my Moscow achievements at our beloved D137 gallery. It turned out that in the dunghill of Moscow-based contemporary artists there are particularly pinguid iridescent dung-beetles, the stars, who nonetheless were not invited to take part in the infelicific Biennale by western curators hired and well-paid by our Ministry of Culture. 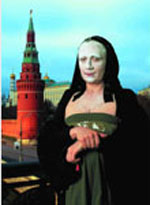 The stardom of these artists, which was, unfortunately, obvious only to themselves and had, in fact, driven them completely insane, clearly required support of heavy artillery – that is, the alignment between this odious group and a pure and innocent person really admired and adored by certain audience and confident of his future. Such a curve has brought me in and made me a participant of a new pretentious project STARZ that seemed to be advantageous to many Moscow players at the time… …I destroyed the very idea of STARZ project and laughed its participants to scorns having made a scoop of a new height of my glory… To these achievements I was helped by a new flash of my old love to Timur Novikov.