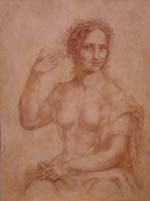 Co-organized with Aidan gallery (Moscow). Vladimir Kolesnikov was born at the 1969 in Krasnodar. He graduated the Art school in Krasnodar and the Kubanskiy State University. From 1993 he is taking part at the different exhibitions in Russia and abroad. Vladimir Kolesnikov began from abstract art and now he is conceptual artist. In Moscow art circles Kolesnikov has become famous for his scandalous project created together with another Krasnodar painter Dmitry Kochanovitch a few years ago. In 1998 in the Aidan gallery exhibition «Shkola X» was organized, dedicated to various combinations of organs of male dignity with classical pictorial images. Painting by Vladimir Kolesnikov presents symbols, which are created through human’s body. His technique is graphic and monochromic and it makes treatment of light and shade more strong and important. Its leave to depict human’s body in difficult foreshortened, using old master’s masterpieces and famous emblems of industrial world – symbols of car industry. Yu. Lebedeva: «The artist makes wide use of High Renaissance images, some of his works bearing common title My Cinquecento and the other referring to specific moments of art history. In many Kolesnikov’s works citations are combined with reproducibility, incompleteness and great freedom in the interpretations of characters whose faces are largely blurred. 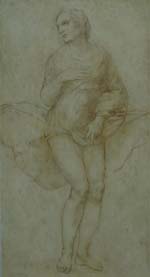 His other works, by contrast, treat the subjects definitely, the characters being quite discernible. All works presented at the exhibition are united by a sort of unkind irony. Classical Renaissance images reminding one of the Renaissance titans Michelangelo and Leonardo appear to represent cruelty. Thus, the idea of humanism developed by Renaissance masters turns out obsolete to Kolesnikov whose two meter canvases represent murderous biblical subjects of crucifixion, St Sebastian, Judith, David with Goliath’s head. In his Triple Elvis, the artist arms nude figures with pistols, thus creating double reference to classical drawings and pop-art multiple images of superstars invented by Andy Warhol». In Kolesnikov’s last series BANG BANG cruelty gives place to sarcasm. Though there are no armaments, the characters’ fingers show the internationally recognized gesture of POOP. Leonardo’s warriors who used to furiously hack at each other with their swords are apparently having a friendly conversation while Lucretia seems to have changed her mind regarding the suicide.