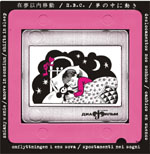 Interactive Slide-Film Collection with parallel sound 1996-2003 Slide-Sound Therapy / P.V.S./ Peremeshenija Vo Sne /S.I.S./ Shifts In Sleep >> Versetzung Im Traum /V.I.T./. St.Petersburg >> Petergof >> Oranienbaum / Oranienburg >> Berlin >> Silvery Boulevard 66 >> Science Prospekt 777 >> Alles Fenster >> WindowPain >> Angeldust >> Free Fall >> Air Crash «P.V.S.» took off in the spring of 1996 at Serebristy Boulevard during a night photo-session, when the fundamental material for the first slide-film was shot. In 1997 Alexander Strelets and his friend Evgeniy Tjukin began collaborating in creation of live slide-films with sound. As of now their collection includes 13 Live Slide-Films, shot by psychonauts during travels through SPb, its surroundings, Berlin, and other cities and regions. The total length of the live performance of Sound-and-Slide-Therapy exceeds 4 hours. A live slide film is a constantly transforming image, projected simultaneously from two projectors. This makes possible a demonstration of unexpected and striking superimpositions of photo frames, synchronized with sound – a live audio-mix of avant-garde and electronic music of the 90s, personal sound recordings and a multiplicity of fragments by bands of various stylistic directions. S.I.S. Audio-Visual Performances took place in clubs, squats, galleries and festivals in SPb, Moscow, Berlin and other cities. In 2001 the project was presented on a multimedia disk «Modern Photography in Saint-Petersburg» (joint undertaking with M. Znamensky). The experience turned out to be interesting, and the idea of creating our own interactive disk based on live slide-films came into being. This disk was created by Maksim Znamensky in Macromedia Director. A unique interactive structure for viewing dia-films with sound can be operated in both automatic and manual modes (the latter gives the viewer control over the audio and visual sequence). The dia-films on disk are composed of live slide-films fragments from the «P.V.S.» collection. The superimposition effect, actively utilized in the computer version, is in fact an imitation of the manual imposition of two slides with two projectors. Imposition of reflections in one shot was attained by a mirror ( ALAKREZ(RORRIM) technique). Dia-films «Air Crash» and «Angeldust» are based on a collage by Galia Isachenko and scratched slides by Alex Redkach. All slides are presented in their original condition, with no digital alteration. The core of the disk is formed by the inter-reel of the «P.V.S.» «Serebristy Boulevard»- the third link in the chain that connects the original hand-made photo installation, the dia-film produced by photo-reproduction, and the interactive version.