Photographer Alexander Strelets was born in 1974 in Leningrad. In 1991 graduated the Physic-Technique School and joined the Plasma Physics Faculty of St. Petersburg Technical University. In 1994 he gave up the university and started to work as an art photographer, shooting the city landscapes, portraits and still life and using the black and white hand-made print. In 1995 he made his first personal exhibition «Petersburg. Solitude. Crazy Holes» in Dostoevskiy museum. In 1999 he and Evgeniy Tjukin created «New Basis» group. The personal exhibition of Alexander Strelets at the D137 Gallery sums up his experiments with mirror-and-camera. The idea of shooting through mirror first occurred to Alexander in 1996. The technique provides a live photomontage, where the image and its reflection are fantastically combined, the camera catches a unique living motion of space and time. The two-hall exhibition presents black-and-white and color photos made in St. Petersburg, Berlin and other cities and places since 1995. The color photos are manually printed from slides using the analog method, while the black-and-white ones are manually printed by the author himself. All these works have been never exhibited before. 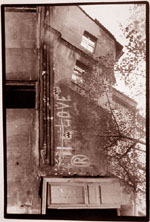 The photographs at the exhibition are organized in a definite order, so that the whole set presents a special time-spatial succession of events and forms a photo-basis of living space, created by a mirror, a key to the new dimension in photography. This explains the name of the exhibition «Alakrez» which is a mirror-reflection of the real word «Zerkala» (as «Rorrim» and «Mirror» in English). Starting from 1997, parallel with photography, Alexander Strelets in a collaboration with Evgenij Tjukin (New Basis Group) has been working on creating of the live slide-sound films using a composition of two simultaneous projections and live miximg sounds, developing a conseption that was called «Peremeshenija Vo Sne» /P.V.S./ (/S.I.S./ «Shift in Sleep»). As the author puts it: «/P.V.S./ (S.I.S.) is a visual-audio reality report, shift of slides and ounds in spase and time, teleportation of the viewer to various spot and states, immersesion in the atmosphere of psychodelic trips, transitions of memories and memories of transitions, childhood regressions and reincarnation sensations, sinking into sleep. Mechanism of dreaming-submergence-awakening… Peremeshenija vo sne vechni i beskonechni / shift in sleep – endless – eternal…» Elena Neverdovskaya (www.arteria.ru): «Audio-visual performance «Shifts in Sleep» is a consciousness stream of a high intensity and penetrating power. Super-saturated product of sounds and visual images. The «New Basis» live slide-film performances filled the vacuum, presenting to the audiense the products of sublime hand-made complexity».