Curator – Andrey Khlobistin. “Women in ports try to touch a sailor who has just returned from a voyage; this is supposed to bring them good luck”. Popular superstition. “When he came in and saw an hussar of the line recounting his military exploits (Prince Andrew could not endure that sort of man), he gave Boris a pleasant smile, frowned as with half-closed eyes he looked at Rostov, bowed slightly and wearily, and sat down languidly on the sofa: he felt it unpleasant to have dropped in on bad company.” Leo Tolstoy, War and Peace. One hundred and thirty years ago, Leo Tolstoy gave a spot-on description of the emotions experienced by one of our own contemporaries — local artist and dandy Georgy Guryanov. Georgy is one of the few modern artists who does as he pleases. Life is not easy for him; he is far more exacting and lofty towards himself than any foe or flatterer would ever be. Georgy’s works are the fruit of his constant aspiration towards irreproachability and splendour, which takes over his entire organism. People sense this in both his behaviour and his works. Even if the majority do not discern any artistic technique, they still feel the seriousness and range of his gesture. 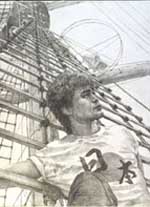 Describing the reign of King August the Strong of Saxony, Ivan Chechot wrote that the masses demanded splendour from the upper classes. Wilfulness and waywardness delighted and frightened them to an equal extent (the above scene from War and Peace ends with Count Rostov confessing to himself, to his surprise, “that of all the men he knew there was none he would so much like to have for a friend as that very adjutant whom he so hated.”) For fifteen years now, the subject of Guryanov’s oeuvre has been unchanging and plastically canonic. This is the world of statuary heroes — sex symbols who have crossed the borders of the human, while retaining an unclear Russian charm favourably influencing the market values of his works. The absolute leaders among them are sailors, pilots and sportsmen, ousting Alexander Rodchenko’s half-dressed workers and collective farmwomen. Besides Soviet photography of the 1920s and 1930s and Classical sculpture, the clear sources of the artist’s inspiration are Leni Riefenstahl, Alexander Samokhvalov and Alexander Deineka. What does Georgy Guryanov find so attractive in all of this? What is the reason for the intense public interest? This is Georgy’s romantic notion of an heroic adventure. The sailor (or aeronaut) is an eternal symbol of man in the throes of passion, embarking upon the inexorable risk of sailing into another world. Georgy does not favour young captains in camisoles. He prefers an expressed male type — sailors, sergeants and naval cadets or a male brotherhood recalling the “houses of men” from the days of Homer, betraying the artist’s own personal utopia. The only background to the figures of these athletes is the sky and the sea. Self-disciplined, they gaze silently into the distance. The ideal abstractedness of Guryanov’s images, however, is deceptive. The Baltic sailor marching in the ranks of similar men of unearthly beauty is the young Marlon Brando. The artist’s friends — Victor Tsoi and Georgy Kasparian — pose for him on the deck of a sailing ship. The rowers peering into the distance include the artist and his models, repeated at different angles. This cycle of works takes us back to the lost, original character of the naval port of St Petersburg. Guryanov’s oeuvre is dualistic. First of all, it is painting, graphic art and retouched photography, in which the artist has recently shown an interest. Holed up in his studio, Georgy always works simultaneously on several large canvases, painting with such self-immersion that one can judge by his mood just how successfully work is proceeding. He can spend years working on one particular painting, seeking new accents, falling in love with his heroes and daydreaming. When everything is virtually complete, he can pick up the emery and remove the paintwork, right down to the prime coating, starting all over again. The state of the surface of the canvas corresponds to his own mental and physical state. The only way of getting hold of a painting by Georgy is to simply tear it out of his hands. A few artful connoisseurs have managed to get hold of works still at the stage of drawing or undercoating. These stages, they affirm, are in no way inferior to the finished painting, which Georgy never considers entirely completed. The current situation in modern art is sluggish and monotonous. The main events develop not in the subject or the text, but in the formation of new textures, intonations and a new feeling for life. Constantly working and acutely seeing, Georgy senses this. That is why, interested in photography, he dedicates most of his time to refined retouches. Adding an ideal and seductive ring to his image, he removes all the superfluous details. Or, on the contrary, he can add the missing head of a rider to the Parthenon marbles, in such a way that no art expert would ever be able to tell the difference. Most of Georgy’s photographs are shots of Classical sculptures taken in Italy or architectural motifs of his beloved Madrid. Another important component of Guryanov’s oeuvre is work on his own image. Like any other handsome Narcissus in St Petersburg, the artist slaves away on a dandified socialite who is himself a work of art — Georgy Guryanov. Georgy know his own tastes; he is upright and unforgiving towards those he does not like. This has a strong effect on cynics. Georgy is extremely serious about both himself and his art. Sincerely aspiring towards the ideal, he is merciless both to himself and those surrounding him. Georgy was at the forefront of all fashionable movements in the 1980s and 1990s. He was a member of Russian rock group Kino, contributing to its trendy image. He was also at the forefront of the club and rave scenes. In parallel, Georgy returned to painting, which he had abandoned after studying at the Valentin Serov School of Art. He achieved remarkable successes, becoming one of the Russian artists most exhibited in museums. His customers include pop stars (Mylene Farmer and Marusha) and aristocrats (the Bismarck and Hapsburg dynasties). In 1990, a group of top Moscow critics — who had no special reason to love an artist from Leningrad — voted Georgy “artist of the year”. This society lion, however, is now more of a recluse. He only hangs out with a small circle of friends, holding rare soirees which everyone attempts to attend. Only a lucky few receive the rare privilege of being allowed to see his most recent works, which are instantly snapped up by private collectors, before the public can get a chance to see them. This explains why so many people always turn up to look at his works and the legendary dandy himself whenever he holds a show at the Gallery D137.