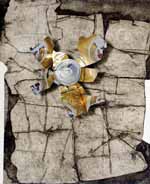 Booklet. Valentin Gerasimenko’s project brings together a series of graphic work and printed forms or “plates”. The artist usually demonstrates the perfection of the art of printing, hiding the all-important technical aspect, the role of craftsmanship, from the viewer. Gerasimenko, however, has combined the tradition of engraving with a radical and unusual material — the beer can. There have been various different cans in the history of art, the most famous being Andy Warhol’s Campbell’s soup cans. Gerasimenko employs the can first and foremost as his material. He continues the Warhol line by printing graphic sheets in different colour versions. Recycling garbage is now common practice in modern civilisation. 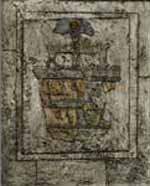 The ecological idea goes hand in hand with alchemy. Everything is dissolved — polyethylene into air, glass into water and metal into earth. Rubbish is thrown into assorted skips. The aluminum of the beer can has to decompose in the same way as the human body, sometimes even going on to become an aeroplane. The aesthetic transformation of beer cans into graphic sheets in Valentin Gerasimenko’s artistic project inherits the ideas of complete mutual transformation. Instead of a return to “nature”, the transformed object is mired even deeper in “culture”. Worthy of a collection or “cabinet” of engravings, Valentin Gerasimenko’s graphic sheets and printed forms are distinguished for their mass character and the social nature of the employed material. The effect of the project is based on a contrast and clash of tradition and modernity — the “high” technique of etching and “low” throwaway packaging. The beer can lends Gerasimenko’s work on the form and the graphic sheet a somewhat Rabelaisian effect of the perception of art. First the content is employed, and then the packaging. Valentin Gerasimenko concentrates on creating a complex and graphically striking texture. The traditional artistic boundaries are breached at the exhibition by a new object — the printed form. The artist’s technique combines several meanings — from a toy inspired by a tin soldier to the culturological sense of ecology. The everyday material repudiates all pathos; one can count the number of tins and the brand of beer employed in the construction of the printed graphic form. Unexpectedly and not entirely seriously, the artist demonstrates the “inside” of the graphic work. Alongside the sheets, the printed forms on exhibition are intended to reveal both the device and all the artist’s work. The artist is interested in the aesthetics of the printed form itself. His works are technically linked to the circle of ideas of civilisation. Playing up the refuse nature of art, Valentin Gerasimenko — a modern artist — assimilates elements of progress in his selected graphic technique. The beer can has come full circle in the cultural and natural environment. The invention of the drinks can with opener has been hailed as one of the most revolutionary developments in the twentieth century. Only a few years separate this mythological object of the Soviet period from its transformation into trash. Professional collectors have now have appeared, who hunt for cans in order to trade them in for scrap metal. One quick blow of the foot and the empty can is flattened. The contents have been drunk and the aluminium can is saved by the artist, who finally works out the function of the object. The life of the beer can ends not on the rubbish heap, but in the artist’s studio, as so often happens in modern times.